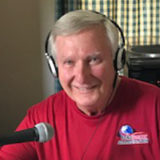 Rich Suckiel was born in Jersey City, NJ and resides in Brick, NJ. He served in the US Army from 1966-68 as an MP reaching the rank of Sergeant. Later, he attended St. Peter’s College at the Institute of Banking. His career in banking began in 1965 with Chase Manhattan Bank in New York City; he currently works as a Branch Manager for Capital One Bank. In 1984, Rich married his sweetheart Celina, and they have two wonderful children: Brian & Melissa.

Rich’s love for polka music started while he was in the Army listening to his brother Vinny’s vast collection of 78 RPM records featuring Bernie Witkowski, the Connecticut Twins, Ray Henry, Frank Wojnarowski, Joe Rock, and many more.

THE POLKA SHINDIG made its debut on Polka Legacy in January of 2010 with the blessing of Polkaman Jack Baciewski and the encouragement of his long time friend: Mike Pacholski. The program aired on Legacy until that network ceased operations on August 30, 2011 after which the program moved to the Polka Jammer Network the following October.

THE POLKA SHINDIG features many “Moldie Oldie Golden Goodies”, plus LIVE and unreleased material and newer releases.  Rich is in the chat room during the airing of his shows, so please drop in and say “Hi”!