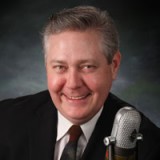 Craig Ebel, the host of the “It’s Polka Time!” radio shows, has been involved in polka music all his life. He grew up in a musical family, with his mother, LaVay, singing and playing guitar in country western bands and his father, Elhart, building and operating the Bel-Rae Ballroom from 1964 to 1971. The Bel-Rae became one of the most popular dance spots in the upper Midwest and a great influence on Craig’s musical career.

Ever since Craig was a little boy, in addition to being a musician, he wanted to be a polka DJ. He used to pretend he was an announcer by turning cardboard boxes into control boards. He would take tubes and dials from old televisions he found at the dump and affix them to the cardboard boxes. He would spend hours introducing songs and telling his audience about the bands.

A graduate of Brown Institute School of Broadcasting, Craig has been in all facets of radio broadcasting including announcer, reporter, board operator and producer. In 1981, while attending classes at Brown, Craig’s landed his first radio job as an announcer on “Polka Polka” AM 1010 WMIN (formally WJSW) in Maplewood, Minnesota. The station was only on from sunrise to sunset, but its format included 80 percent polka music.

Craig worked as an announcer for AM 1400 & FM 107 WHLB “Someplace Special” in Virginia, Minnesota. During his employment on the Iron Range, he worked with announcer John Snidarich to produce the popular “Polkas International”. Upon Johnny’s retirement after twenty years on the air, Craig took over the program and re-titled it under the name: “Polka Lover’s Time!”. This Slovenian style show aired on Sunday mornings over AM 1340 KBRT in Eveleth, Minnesota for 31 years until April 2012 when that station was sold and its format changed to sports talk. Craig teamed up with Robert “Butch” Jambor from the Bel-Rae Ballroom to produce a two-hour Saturday morning show entitled “Polka Jamboree!” over AM 730 WRPX in Hudson, Wisconsin. The show only lasted for nine months, but it became the stepping-stone for bringing back polka music on the airwaves in the Twin Cities.

In September of 1994, Craig began airing a 2 hour “flagship” edition of “It’s Polka Time!” which aired on Sunday mornings over AM 1220 WMGT in Stillwater, MN. His show soon became the only polka show airing in the Twin Cities. The show aired on WMGT until September 3, 2006 when the station owner sold all of the airtime to a “Music Of Your Life” conglomerate and changed call letters & formats.

With the encouragement of his affiliates, on November 4th, 2006, Craig began offering an expanded 2 hour edition of “It’s Polka Time!” in addition to his regular one hour show. 10 of his affiliates took him up on the offer for the 2-hour show.

“It’s Polka Time!” is syndicated on many radio stations across the United States including here on the Jammer. Please visit Craig’s website at www.itspolkatime.com for a current list of stations and times.

Radio stations interested in becoming an affiliate of “It’s Polka Time!”, can request a demo packet by e-mailing: itspolkatime@hotmail.com.

In addition to his radio duties on “It’s Polka Time!”, Craig has been playing drums professionally for over 30 years in all styles of music including rock, country, big band, and polka. He has performed with America’s Polka King Frank Yankovic, Grammy Award Winner Walter Ostanek, Myron Floren of the Lawrence Welk Show, Dick Contino, The Mrozinski Brothers Aleatoric Ensemble, John Filipczak & The Classics, The Six Fat Dutchmen, Nashville’s Joey Miskulin, Leroy Larson & The Minnesota Scandinavian Ensemble, Roger Bright, and now as leader of his own band: DyVersaCo.

Craig was inducted into the International Polka Association (IPA) Hall-Of-Fame in 2012.

“It’s Polka Time!” with Craig Ebel plays the widest variety of polka music: from traditional “Polish-Style” polka music, to Slovenian, German, & Dutchmen styles of polka music. Craig’s show first came to the Jammer on January 10, 2004 after airing for a brief period on www.247polkaheaven.com. It was the first program picked up by the Jammer after it began operations in 2003.

The program originates from “The Land Of Happiness”: Minneapolis, MN.