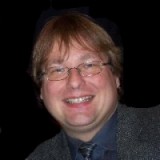 Jim Kucharski first started playing polka music in July of 1987 with the late Joe Walega. Since then, he has performed with many bands over the years, including Gennie O & the Windy City Brass, Stas Golonka, Tony Blazonczyk’s South Side Sounds, CMA, Take Five, The Ampol-Aires, The Good Times, Freeze Dried, & Bill Gula’s Chicago Image.

He caught the radio bug in October of 2000 and began airing a show on 247PolkaHeaven.com until February of 2004. During that time, he was approached by Polkaman Jack Baciewski to take part in a new venture: the Polka Jammer Network. His first show aired in January of 2003. After Polkaman Jack’s departure in October of 2008, Jim took over all operations of the network and became its President, serving in that capacity from 2008 until 2013. Personal & financial issues resulting from the Great Recession forced Jim to leave the Polka Jammer Network in 2014. He returned in January of 2017 as an IJ.

In October of 2010, Major Mel helped Jim realize a dream of doing a show on FM radio. He started airing a show on WERG 90.5FM in Erie, PA. His show has been heard on WHYP, WWCB,  KCTI, & WJYI. In July of 2015, Jim was asked to do the Polish Hour for the Polka Parade on WJYI in Milwaukee, WI (changed to WJOI) with the retirement of Jerry Halkoski. In January of 2019, Jim began airing a local show for Huntley Community Radio 101.5FM WHRU on Saturday mornings with an additional Friday airing added a year later.

While Jim Kucharski no longer performs polka music on stage, he is involved in the Music Ministry at the Church of the Holy Apostles in McHenry, IL, and has been there since July of 2018. Prior to that, he was at St. John Fisher in Chicago from July of 2002 until August of 2018.