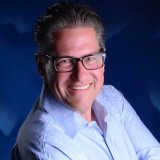 Keith Stras was born in Chicago, on October 9, 1961. At an early age, Stras seemed to be interested in entertaining people. His late Uncle Ned Locke, a 25 year veteran of Chicagoland television and radio, was responsible for Stras being bitten by the limelight bug. Ned, a Circus Ringmaster on WGN’s “Bozo Circus” can also be credited for Stras’ other love, the circus. Stras appears locally in the Ringmaster role for various Circus productions.

Stras, half Polish and half Italian, was first introduced to polka music by his Italian grandfather at age thirteen via a live WTAQ radio remote from Chicago’s Polonia Grove during the 1974 Bel-Aire Days.

From that day, Stras fell in love with polkas. As the principal host on the Schaumburg High School radio station is when Stras began spinning polkas. Imagine if you can, walking down the hallways of a suburban high school to the music of Eddie Blazonczyk, Stas Golonka, and Li’l Richard blasting out of the speakers. Stras claims, “I took a lot of heat from the student body” “Hey! Is that guy crazy, we want to hear Led Zeppelin or Aerosmith, not some music my grandparents listen to.”

It was in his freshman year at age 15 when he was approached by Richard Towalski (Li’l Richard) in 1976 to co-host a Sunday morning polka program over radio station WONX 1590 AM, the show lasted 26 weeks. During that time he was referred to as “Chicago’s Youngest Polka Disc Jockey.”

After leaving WONX, he went on his own and purchased a half hour program on WOPA which was aired on Sunday afternoons. During this time, he also formed the SPA (Schaumburg Polka Association), a group of about twenty of his high school friends that frequented local polka events. After graduation in 1979, Stras teamed up with high school pal Jeff Chester and purchased radio time on WTAQ 1300AM during it’s Saturday Polka Block. “The Polka Review Show” aired for over two years. In addition, Stras was also featured during this time on the IPA radio show with Leon Kozicki and Jerry Drust, which was also heard on WTAQ.

In 1982, Lenny Gomulka approached him and asked to join him on the radio. The program name was changed to the “Chicago Push Show” and Stras co-hosted with Gomulka for over two years. It was also during this period that Stras’ “Polka Review Productions” was responsible for providing Chicago polka fans with over 3 1/2 hours of polka programming each week on WTAQ. Stras and Danny Mateja (Downtown Sound) hosted countless Tuesday evening remotes from the Lone Tree Inn in Niles, IL. It was also in 1982 when Stras presented the “Labor Day Polka Jamboree” at the Sheraton O’Hare Hotel in Chicago which featured 11 polka bands from across the country. The event left Stras financially embarrassed, and it looked as if he would bow out of the polka industry. In 1983, while attending DePaul University, he again re-entered the polka music industry and teamed up with Rick Rzeszutko (Music Co.) and they started to produce the extremely popular “Polka Get Together Show”, which lasted for 5 years on WEAW, WVVX-FM, WPNA, and WCEV. Stras and Rzeszutko were often referred to as “Chicago’s Polka shock jocks,” known for their wild and crazy humor and unique style of polka broadcasting.

Keith has an uncanny knack for bringing polka music to new heights, he has developed a unique working relationship with many in the Chicago major market media. In 1985, with the success of the Chicago Bears, Eddie Blazonczyk recorded a polka version of their fight song and an original Bears tune. Stras orchestrated a media blitz which won Blazonczyk a local feature on every major network television and radio station in Chicago as well as several in New Orleans the site of that year’s Super Bowl.

After appearing on a live “New Year’s Eve” Chicago television special, Stras was approached by then President and owner of ETC:  T. Ron Jasinski-Herbert and was hired as Executive Producer and Host of “Polka Video’s” (a weekly variety, interview program that featured polka music.) It wasn’t too long after this that Stras was in the company of Harry Caray, Walter Payton, Gene Siskel, Frankie Avalon, and Geraldo Rivera to name a few introducing them to the Chicagoland polka market. He also produced the nation’s only polka game shows: “Polka Combat,” “Polka Feuds” and “Name That Polka,” which featured numerous polka band members, DJ’s and polka organization members who would vie for the title of “Polka Television Champs” each year. These shows became an instant success not only in Chicago, but on many cable outlets in Cleveland, Ohio, and also Pennsylvania public television. During its 7-year run from 1986-1993, the program was nominated five times for Chicago television’s prestigious Emmy Award.

In his 39-year polka broadcasting career, Stras has staged countless polka affairs and tours and has been honored to serve as Master of Ceremonies for numerous events. Using polka music as his backdrop, Stras has single-handedly raised over $35,000 for many of Chicago’s Children’s Charities. In October of 2011, he was instrumental in raising $14,500 for the Tribune Disaster Fund, which aided the people who were affected by the September 11th tragedy. Stras’ involvement in the Chicago polka industry is legendary. Since 1979, he has been an active member of the International Polka Association. He served in various capacities from Queen Contest Chairman to Director to First Vice President and ultimately, he served as IPA President for two consecutive terms from 1993-1995. During his tenure as IPA President, Stras was the First President in IPA History to have over 1,000 active members in the organization. He computerized the IPA bringing it up to speed with the rest of the world. His marketing techniques, including 1-800-TO-POLKA attracted increased interest in the meetings and events. It was under his direction that the IPA produced a second major festival. The first-ever “Slovenian Polka Fest” was held in St. Louis, and the following year in Milwaukee. Stras also kept the IPA in the forefront by reuniting with Leon Kozicki and producing the IPA radio program, first on WCEV and then on WPNA from 1991-1996.

Stras’ K&C Entertainment to date has contributed over $5,000 to various polka causes to help perpetuate the polka, including the IPA Polka Music Hall of Fame, The Freddy K Jr. Scholarship Fund, The Chicago Versatones Fan Club, The Cleveland Style Polka Music Hall of Fame, the USPA, 247 Polka Heaven and the Polka Jammer Network confirming their commitment to our industry.

In the fall of 1999, Keith and Camille Stras had begun to lay the groundwork for a new venture with a Chicago landmark. Keith and Camille Stras collaborated together with Marge Machay and family, the owners and operators of the famous Polonia Banquet’s in Chicago, K&C Tours became Great Escapes Tours and Travel, with an office inside of Polonia Banquets on Archer Avenue in Chicago. In January of 2000, the Grand Opening was held with more than 400 people in attendance to congratulate Keith, Camille, Marge and family on this new venture. In February of 2001, the opened a second office on Chicago’s Northwest side on North Milwaukee Ave. In 2002, Machay & family left the travel business..and Keith & Camille re-opened K & C Entertainment. Since then, more than 20,000 people have been on board for a K & C Tour and thousands have enjoyed polka themed events around Chicagoland. “His knowledge is legendary” ” He knows travel-he knows polkas-he knows radio & television-he’s a promotional genius, sometimes it scares me”. claimed Machay back in 2000.

Today Stras is enjoying more nationwide acclaim by serving as the Announcer on the Nationally Televised Jimmy Sturr Television show seen on RFD-TV and Family Net. His Broadcasts can also be heard over the internet first airing on 247 Poka Heaven and now monthly at www.polkajammernetwork.org and his weekly “Polka Sessions Show” which is heard on WPNA 1490AM on Sunday mornings from 10:30 AM until 11:00 AM Central Time. “I’ve trimmed back my radio shows this year to devote more time to my family and business”, said Stras, “Camille and I have two daughters. Shelby will start her junior year at Columbia College in the fall, and 13-year-old Natalie can be heard a few times a month over WPNA with me.”

Stras has also become a record producer and vocalists with many groups in the polka industry, they joke about Stras only knowing one song, The “Red Shoes” polka, a favorite of Stras’, was recorded with Casey Homel’s Band in 1994, and much to the surprise of many, he has recorded many more tunes over the years. Surprisingly, Stras doesn’t speak or understand the Polish language. His latest project “Honky Heaven ” was released in October of 2013. The entire K & C Recording library can be viewed at www.keithstras.com. In addition, Keith Stras & the Polka Confetti band appear locally.

Stras plans to be around for a long time. When asked how much longer he plans to promote polkas, he answers: ” As long as polkas keep people smiling, I’ll be here to see them grin!”

Polkaman Jack Baciewski brought Keith Stras to the Jammer on August 5, 2004. He aired a LIVE show on Thursday nights for a number of years when scheduling conflicts & business commitments forced him to leave the network in May of 2009. He returned in April of 2013, and now airs holiday specials for the Jammer about once a month.