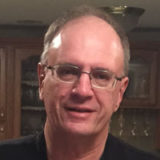 Mitch Moskal’s love for music started at a very young age. His first experience with music came with playing his “Golden Records” on a child record player. He later graduated to his parent’s record player spinning the “Pop Hit” 78s of the day that his mother would buy. That, in turn, led to his collection of Rock & Roll 45s and LPs. Along the way came Soundtracks, Broadway Cast recordings, Easy Listening vocals and instrumental music, Country, Classical and some Jazz thrown in for good measure. Although he was born and raised in a Polish home, when he was younger Polka music was not on the top of his music list.

All that changed sometime in early 1988 when one Saturday morning while scanning up and down the FM radio dial he heard a type of music that he remembered hearing while growing up at home…Polka Music. This music had a much different sound when compared to the Polkas he remembered; it was more modern sounding and grabbed his attention immediately. After several weeks of talking with the DJ on the phone, he decided to ask if he could come to the station to “check it out”. That first visit led to many others until he decided to get his broadcast license so he could fill in for the two Polka DJs on WMUA-FM when they needed time off to play in their respective bands.

Now looking back, Mitch finds it hard to believe that this musical journey started over 27 years ago and that it now brings him back again to the Polka Jammer Network after an absence of 7 years. Many of you may know him as the host of the Early Bird Polka Show on Saturday morning on WMUA-FM or from his previous stint on the Polka Jammer Network from 2006 to 2009 as producer of his Thursday night Polka show, The Nite Owl Show. Now he’ll be back again broadcasting from the basement of his home in Holyoke, Massachusetts, this time on Saturday mornings from 6-8:30 a.m. Eastern Time, exclusively on the Polka Jammer Network as the producer of the Early Bird Polka Show.