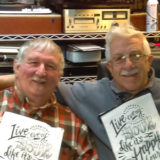 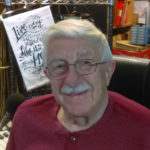 John always had a passion for polka music. During the late 80’s he began co-hosting a polka program on WHUS with the late Frank Simulslaski on Saturday mornings. His moniker “O Johnny” is a familiar one on the airwaves. Several time changes came about over the years due to the waning of the popularity of Polka and Polish music, but John was steadfast and never gave up producing a polka program. His show “As the Polka Turns” can now be heard every Saturday morning on WHUS from 9 to 11 AM the current timeframe.

In the early years, John had a 4 piece band called “The DJs” who would perform for weddings, parties and the like. He was the main beat as the drummer man and vocalist for the group as well as their booking agent.

John met Mike Pacholski over twenty years ago at WHUS when they were doing one of their Radiothons to raise funds for the radio station. The actual first conversation centered on military service and the American Legion which is how they eventually became good friends. 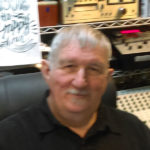 Mike was introduced to polka music and traditions at a very young age. At that time, Saturday, Sunday and mid-week live radio broadcasts on AM radio from the Polish National Home in Hartford, Connecticut and from the Crystal Lake Ballroom in Ellington were the norms. His Aunt Sally was the main reason his love for polka music grew to what it is today. Although during his teen and young adult years he strayed away from those roots, at the passing of his Aunt Sally and the gifting of those old 78’s to him that he used to play on her Capeheart phonograph, his interest was sparked anew. He began a quest to find as many old polkas 78’s and LP’s he could get his hands on in order to preserve and eventually share them with a radio audience.

At the urging of Johnny Prytko senior whom he met at a Strawberry Festival one year, he began guest DJing and assisting John on his radio program on WWUH out of the University of Hartford on Saturday mornings. It wasn’t long before he went on to WHUS at the University of Connecticut in Storrs to produce and have his own show “The WHUS Polka Zone” during the early 90’s on Saturday mornings that Frank Simulslaski and Johnny Hurchala’s polka program, “O Johnny”. His first internet show was called “My Aunt Sally’s Attic” aired live on the Polka Jammer Network Friday evenings when it first became a reality in the new millennium. His polka buddy and friend Polkaman Jack Baciewski was the major reason for that happening. He was ordained “The Golden Voice of Polka Radio” early on his DJ career by Gene Orland, another great polka DJ from Bristol or as he was known “The Copper Voice of Polka Radio.”

As time went on and things changed and retirement became a reality, Mike slowly eased off of the radio program and Jammer duties to enjoy some much-needed rest. It wasn’t going to last too long though as his good friend John Hurchala was now producing his show on WHUS “As The Polka Turns” on Saturday mornings and he always asked Mike to fill in when he couldn’t be there.

Recently both John and Mike have been broadcasting “As the Polka Turns” on WHUS 91.7 FM or WHUS.org on the internet Saturday mornings from 8 to 10 AM and John suggested they try to do a show on the Polka Jammer Network. Well, the rest is history as now they are now producing their Jammer show “Happy Hour Polkas.”