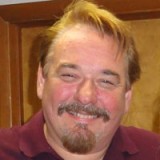 Eddie has spent almost 40 years performing polka and a large variety of music styles. His voice led two Toledo based groups, Crusade and Toledo’s Polka Motion, to the pinnacle of polka music.

A trained opera tenor, Eddie has been called upon to utilize his powerful voice in musicals, jazz combos, operas, rock, pop, church cantor and, of course, polka.

Starting on drums, Eddie won his school’s talent contest in the 4th grade. His professional career began the following year in his home town of Toledo, Ohio. As his love for polka grew, so too did his musical tastes. In the 8th grade, he asked his father for an accordion (the Giulietti he still plays on stage) for Christmas. Concertina followed. Performing with several bands he eventually landed his first recording gig at the age of 18 with the Troubadours. Next it was move to accordion and two years with The Holy Toledo Polka Stars. Eddie was a founding member of the Toledo Polkamotion (TPM). His voice and arrangement on “Red Berries” helped TPM receive a Grammy nomination. In 1996, Eddie joined forces with his long time friend, Randy Krajewski, and Crusade was born.

Eddie turned down an opportunity to sing opera in Germany to stay with his first love…..polka. He has won Male Vocalist of the Year from both the USPA and IPA and has received numerous other band awards.

In 2007, Eddie left Toledo and moved to Belvidere, New Jersey for steady employment. He folded Crusade that same year. Currently, Eddie is a cantor at two churches in Northwest New Jersey and was an active member at the Bayway Polish Home in Elizabeth, New Jersey until it closed on August 24, 2013 after 90 years in operation. He has two daughters, Krystal and Keszia and one son, Edziu.

Eddie Biegaj came to the Jammer in July of 2010.