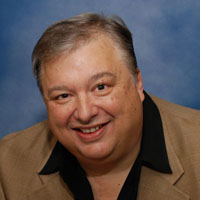 As a toddler, Joe Oberaitis was already the polka promoter herding the neighborhood kids together and making them listen to his polka records. By kindergarten, Joe was taking accordion lessons. At age seven, he had already appeared on the local TV talent show, “The Gene Carroll Show,” playing Eddie Zima’s Meet The Missus Polka which he learned by ear. Through grade school, he regularly played at school functions and then graduated on to Rubbermaid parties, community clubs and family gatherings. In the fifth grade, Joe put together his first little band. Joe’s father made a cardboard stand that said the “POLKA-AIRES” and they played the Ampol Aires’s “Hi-Fi Polka” for a PTA party. In high school, Joe was a columnist for Polka News, published by Stan Saleski of Meriden, Connecticut.

During his first year of college in 1967, Joe joined Ray Budzilek’s band. Doing TV, radio and dance dates while going to school was quite a juggling act. When Ray became ill and was forced to retire, The Belvederes asked Joe to join their band. In 1970, after a year with The Belvederes, Joe was coaxed by Ray’s former clarinet player Eddie Grayson to start his own band. Now attending graduate school, Joe released his first recording, “A Little Bit of Polish Soul” in 1971. The album was a hit and now Joe was once again being asked to play all over the country. After graduate studies, Joe immediately took the job of hosting “The Polish International Program” broadcast Monday-Friday from 3:35 to 5:30 pm over Cleveland’s 50,000 watt “powerhouse” WZAK-FM STEREO. The show was a drive-time success and had a huge listenership based on the Arbitron ratings.

Joe now began regularly appearing on WEWS’s “Polka Varieties” TV show. When the program became syndicated, bookings tripled and record sales soared. “The Joe Oberaitis Band” was voted the “favorite Polish polka band” by the viewing audience. The same year of 1975 brought the band a victory trophy for winning first-place at “The Battle of the Bands” held at Idora Park in Youngstown, Ohio. In his travels, Joe received many awards and commendations, from Long Island to Wisconsin.

Veteran broadcaster A. W. Zebrowski dubbed him “Cleveland’s Polka Prince.” In 1978, Keyboard Magazine credited him with “revitalizing polka music in the industrial Northeast.” The then Mayor of Cleveland, Ralph J. Perk, called him “one of our city’s rising bright lights.” Joe was called on to play for many political functions ; from those of then congresswoman Mary Rose Ocar to even those of then Governor Celeste. The Oberaitis band played the reception for Bobby Vinton at Cleveland City Hall. The band also entertained at the Cleveland Arcade for The Cleveland Area Arts Council. The Joe Oberaitis troupe was always featured at Cleveland’s All Nations Festival for many years. Other memorable engagements include a bash at Cleveland’s Public Music Hall with Joe’s band and Woody Herman. Joe had the distinction of appearing at Cleveland’s beautiful Aragon Ballroom for three separate dance engagements, the last polka band to ever play this famed ballroom. The Joe Oberaitis Band also did convention work in Cleveland utilizing the talents of The Polka Diamond Dancers.

In 1983, Joe Oberaitis moved to Orlando, Florida to become a staff musician for Walt Disney Entertainment Co. Inc. When not performing with the “Octoberfest Polka Band” in the German pavilion at Epcot, Joe is playing polkas with a trio, his own polka band or as a solo entertainer. After arriving in Florida, Joe also hosted his “Polka Jamboree” over WWBC, Cocoa Beach, Florida. Stan Kapp, a polka news-writer once wrote in the Cleveland Polka Association Newsletter that “Joe has so much God-given talent, he should be playing seven days a week.” Well, Stan got his wish. Since moving to Florida, Joe refers to himself as “being polka’d to death!”

In 1993, Joe returned to Cleveland to perform. The event was held Sunday August 8, 1993. The day was designated by Michael R. White, the then 54th Mayor of Cleveland, as “Pan Jozef Oberaitis Day” with an official proclamation from the City of Cleveland. Mayor White said, “People from around the world have enjoyed his music. Because of what Pan Jozef Oberaitis has contributed to the Polish polka community, he has become known as the “Godfather of Polish Soul.”

Joe Oberaitis also returned to Cleveland March 11, 2004 to speak at the joint conference of the Association for Recorded Sound Collections and the Society for American Music. This elite group of Ph.D.‘s was amazed to learn of the depth and greatness of our polka history.

Joe Oberaitis has his own record company, Kerebo Records. He has also recorded for Delta International Records, Wam Records (WRS), 51 West Records (CBS), and Chicago Polkas (Chet Schafer Productions). He also has his own publishing company, Kerebo Music Publishing, affiliated with BMI (Broadcast Music Incorporated). Two of his songs, “Crumbling Hearts Polka” and “Starlight Polka” are on grammy-winning albums. Other hits include “Sparkling Eyes” and “Squeeze Me.” Many polka bands have recorded Oberaitis tunes. Joe’s recording of the “Happy Wanderer” is included in “The Time-Life Treasury of Polka – 30 Greatest Hits.”

In 1995, Joe Oberaitis performed with Li’l Wally for Pope John Paul’s papal visit to Miami for almost a half-million people. Joe frequently played and traveled with Li’l Wally since l983. Li’l Wally’s last album “Co To Jest” was recorded at Kerebo’s studio. Joe played accordion and keyboard on that album. Wally called Joe “Polka Superman.” “He can do it all,” Wally used to say.