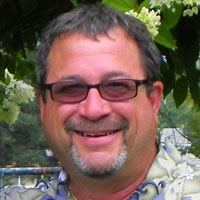 I was born in a 1936 “Stromberg-Carlson” radio and my first toy was a spare 6L6 I found laying inside. I soon found that the cast iron extendable speaker fit in my bedroom window, and I began to broadcast the only station I could receive (CKLW) to the backyard during summer parties. (The local station broadcast Obits all day)

On the family’s frequent trips to the big city, Erie PA to see Busia on Sundays, the car was always filled with polka music which I found seemed to make everyone happier. One weekend when the polka show ended, the station (WJET) dropped back to its regular format which was equally exciting: I heard fast talking fun DJ’s, exciting jingles, and Top-40 music. Having listened to Obits on radio most of my life, I wasn’t prepared for this.

As I got older and traveled more, I searched for more stations like this, and listened, and studied some of the greatest programmers, ever. Stations like WLS and WCFL in Chicago, CKLW Detroit, KCBQ San Diego, WQAM Miami, The Big APE in Jacksonville, WABC New York, and probably the greatest Radio Station of all time WFIL in Philadelphia. I never made it to any of those, but I did get a job in Erie, PA at WWGO and later K-104.

One day, our newsman Gary Loncki mentioned he had a Polka Show on a 10 watt local University station: WERG. The next Sunday, I tuned in, and I was back to my roots. Gary and I started going to Seven Springs, the third year they were open. I have not missed a year since.

When Gary retired from the polka show and Major Mel jumped in, we split the hours. I decided from the beginning that I would bring what I had learned from Top-40 radio to polka radio. Two of the very first things I was taught, was #1: No matter how bad your day is…when you open your mike, you put a big smile on your face (believe me, you can hear it) and #2: Be entertaining, informative and short. Nobody wants to hear you talk unless you have a good comedy show. Just play the music.

HOT AMERICAN POLKAS play the best in modern polka music. In addition to his live show on the Polka Jammer Network, Kenny also airs a pre-recorded terrestrial show on Sunday afternoons from 5:00pm – 7:00pm ET over WERG 90.5FM in Erie, PA. That show has aired on that station since 1986.

Jim Kucharski brought Kenny Olowin to the Jammer in October of 2010.