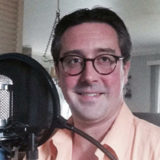 Eric W. Hite was born in 1977 in Lima, Ohio. He began to study music at an early age and started his first church organist position at the age of sixteen. In 1995 and 1996 he competed in the American
Theatre Organ Society’s Young Organist Competition, placing second in his division both times.

In 2003, Eric recorded his first feature-length CD, entitled, “An Hour With Eric,” at the Ohio Theatre in Toledo, OH. Eric is also no stranger to a microphone. He had his first taste of radio filling in for the late Don King (not the boxing promoter!) on the “Saturday Morning Live” program on WCWA in Toledo, Ohio.
This was a “by chance” occurrence in 1997 that led to him getting “the broadcasting bug!” Eric has also been a co-host on the “Sunday Afternoon Dance Hall,” a show which aired on the former WJZE
FM 97.3 and later, back on AM 1230 WCWA. There was also a short stint at an afternoon drive- time music and chat program on WCWA. Although this program was short-lived, it further solidified his radio passion and eagerness to be behind the microphone! From 2010 -2016, Eric was a co-host and the producer
of the Sons of Lagrange Radio Program, right here on the Polka Jammer Network.

Eric also had the privilege of being the last accordionist and bassist with Crusade, featuring Eddie Biegaj, and was featured on the band’s final album, “The Tournament.” He was a founding member of The
Polka Floyd Show band, with whom he recorded two albums and toured.

Other bands Eric has performed/gigged with include: The Glass Town Sound, A Touch of Brass, Toledo Polkamotion, Lou’s Boys, Stephanie and Her Honky Band, John Stevens and Double Shot, C.J. and the Krue, The Kuszwanc Kids, and John Gora and Gorale. There have also been a number of groups on the non-polka side that would take substantial space on this page to mention!

In addition to having his own production/DJ company and doing voice-over work, he is currently the Director of Music and Liturgy of St. Anthony Roman Catholic Church in Temperance, MI where he directs a comprehensive program focusing on Gregorian Chant and polyphony and where liturgies are celebrated in both forms, ordinary and extraordinary (Traditional Latin Mass). He is also organist of Resurrection Polish National Catholic Church in Temperance, MI, is married to Leeann and is the proud father of Eric II, Mary and Claire.