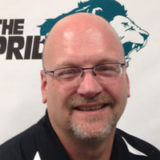 Paul Romanowski was born in Detroit, MI. His father, Eugene Romanowski was the Leader of Eugene Romanowski and his Orchestra in the 1950s. When his Dad was Drafted into the Army, the band continued and called themselves, The Michigan Polka Tels. This band became known for writing the famous “Tatusiu Waltz”, which is still played at many Polish Weddings today.

With his Father’s influence, Paul became obsessed with Polka Music. He started playing drums and singing with local Michigan bands at the age of 4. At the age of 20, Paul joined Rick Vinecki’s Melody Kings, and got his first taste of playing the “ Polka Circuit”. He didn’t stop there! From 1989 through 2008, Paul was the leader of The Michigan Connection and held full-time positions with Duane Malinowski, The Misty Blues, and Darrell Weltin’s New Brass Express.

After studying broadcasting in college, he pursued a career in Radio and was on the air full time from 1984 through 1990 as a morning man, and Sports Announcer. Over the years, Paul has hosted Polka Shows in Houghton Lake, MI, Saginaw, MI, Detroit, MI and his “ Polkas From The South” show was a popular Monday night program on The Polka Jammer Network from 2008 through 2011. His love for polka music and making people happy is evident in his broadcasts.

His greatest accomplishment in Polkas was to be able to play live for several years and record with Mike, John, and the late Paul Fudalla, the famous “ Fudalla Brothers”, who are claimed to be among the Best concertina players in the Polka Music Industry.

Paul resides in Waxhaw, North Carolina with his wife Kelly, daughter Ashley, and adopted son, Mason. His son Matt resides in Syracuse New York. You may hear Matt filling in for Dad on occasion.