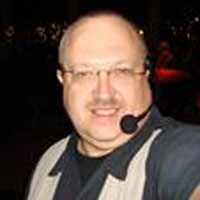 Patrick Henry Cukierka was born and raised on the northwest side of Chicago. He is the son of the late Uncle Henry Cukierka, a popular polka DJ and promoter from the 1950’s through the late 1980’s who got his start from Lil’ Wally. His Dad ran numerous dances and stage shows around the Chicagoland area, most notably at the Ford City Shopping Center as well as annual “Radio Tours” to Poland and many other countries in Europe, Hawaii, Las Vegas and many other destinations around the world.

When Uncle Henry passed away in February of 1989, Patrick, who received his degree in Radio-Television from Southern Illinois University at Carbondale in 1984, took over his Dad’s radio shows on WCEV 1450AM and WSSY 1330AM and began running dances and tours of his own. He has escorted groups all over the world visiting Poland, France, Italy, Australia, New Zealand, Alaska, Hawaii and many other locations including bus trips to many destinations around the United States. He co-founded and produced the Wisconsin Dells Polish Fest from 1991 until 2010. He produced and hosted many Live remote broadcasts all around Chicago as well as from Wisconsin Dells, Las Vegas, Hawaii and even Mexico. In Chicago, he was on WCEV for a number of years then moved to WNDZ 750AM until the late 1990’s when he moved to WNWI 1080AM until 2008 when, with most of his sponsors suffering from the Great Recession, ad cancellations forced him to give up broadcast radio entirely in 2008. He also produced weekly Polka programs for many years that aired on WIBU 1240AM from Poynette, Wisconsin and WPDR 1350AM from Portage, Wisconsin as well as online for www.247polkaheaven.com.

Today, Patrick is an avid promoter in the Chicagoland area running monthly dances as well as the Wisconsin Dells Polka Fest which is held in April. He has also worked with many venues to promote polka music including the Southside Polish Fest and Oktoberfest at Toyota Park, The Taste Of Polonia, and he helped create the short lived Lake Geneva Polka Fest. Though his company, Tiger Entertainment, Patrick has been a DJ at clubs and for weddings, company parties and events throughout the midwest for over 35 years!