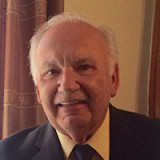 Andy Citkowicz (pronounced: SI-KO-WITS) was born in Jersey City, NJ, the son of Teresa and Felix Citkowicz. His dad, Felix, was an accordionist and recording artist, who in 1959, recorded the first and only Polka LP for Warner Brothers Studios in New York City. That album is called: “Stereo Goes to a Polka Party” (WB 1299), and it can still be purchased on the Internet. The title track from this recording is the Polka Party’s theme song.

Andy also played drums with bands such as Bernie Wytkowski and Ted Macksomowicz in New York City hotels and surrounding areas for many Polish galas. Afterwards, he joined the Flamingo Orchestra, which featured music from Poland. The Flamingo Orchestra played throughout the New Jersey and New York metropolitan areas.

He also taught in the Passaic Public Schools in Passaic, NJ, and also was a computer teacher/technology coordinator until his retirement.

In February 1995, Andy made his debut on radio over WCNJ 89.3FM out of Hazlet, NJ. Later, his show moved on to WPDQ 89.7FM in Freehold, NJ., where the “Sunday Polka Party” found a home for seven years until January of 2002 when the station was sold to a Christian church who eliminated all ethnic programming.

Andy Citkowicz was the first IJ to be appointed by Polkaman Jack Baciewski in July of 2004, and is currently the longest serving IJ on our network.. Andy aired pre-recorded shows on the Jammer for a number of years until converting to a LIVE Saturday show on March 8, 2014.

Andy emceed for Jimmy Sturr and performed in many places such as Atlantic City, Polkapallozza, and numerous festivals throughout the area.

Today, Andy is busy playing drums with local musicians, and is also an active DJ; performing for weddings, parties, and other special events.