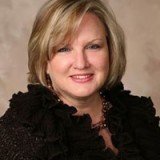 Joni joined the Polka Jammer Network in May 2008 with a one-hour recorded show on Monday night. She soon moved to a two-hour live show on Tuesdays and has settled into the Wednesday 6:00 p.m. Eastern time slot. Through the years, she has hosted many live broadcasts alongside her fellow Jammer IJ’s, especially during the Annual JammerThon, and served on the network Board of Directors for eight years. She also served one term on the Board of the International Polka Association as a Director from Pennsylvania and has written several biographical articles on polka musicians and bands for various polka newspapers. Joni was awarded IJ/DJ of the Year from the members of the United States Polka Association in 2013. Growing up in polka music in the ’60s and ’70s, Joni leans towards music from that era, especially Chicago-style polka music. She loves to meet and greet polka fans and enjoys hearing from them via the chat room, email and text when she is on the air.

Joni has always lived in the Pittsburgh, Pennsylvania area and currently resides in Greensburg with her husband and children.