You are here: Home / PJN Archives / Father Dennis A. Bogusz 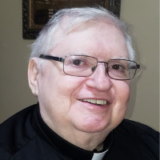 Father Dennis A. Bogusz was born in Cleveland, Ohio on March 11, 1950 to the late Florence Lewandowski Bogusz and the late Frank Bogusz. He received a BA in Theology from St. Mary’s College in Orchard Lake, Michigan and a Master of Divinity from Saint Vincent Seminary in Latrobe, PA. He was ordained to the Priesthood on May 5, 1979 for the Diocese of Greensburg in Pennsylvania. On the day after his ordination he celebrated a mass of thanksgiving at his home parish, St. John Cantius in Cleveland Ohio. Polka music was always enjoyed by Father Dennis and his family. Polka music could be heard throughout the day in the Bogusz household and there was nothing like a good oberek. While a student at Holy Name High School in Cleveland, Ohio, Fr. Dennis considered being a DJ after graduation. Instead he decided to study for the priesthood. Father Dennis’ first experience in being a DJ was for an “in-house” radio station at St. Mary’s in Orchard Lake, Michigan.

After numerous parish assignments he received his pastorate at St. Hyacinth Catholic Church in Monessen, PA. The parish was having a polka dance and Fr. Dennis wanted to promote the dance on radio station WEDO 810 AM in McKeesport, PA and John James, the station manager, told him the procedure to have the dance promoted. Mr. James then said “how else can I help you”. That triggered a light and Fr. Dennis said that he would like to have a radio program playing Polish music and promoting Polish culture and the Catholic faith. The rest is history. Fr. Dennis began the program entitled “Echoes of Poland” on June 1, 1990; the year 2021 marks 31 years since the program began. In 2008 he was honored by the Central Council of Polish Organizations of Pittsburgh with the title “Polonian of the Year” for his radio work.

Fr. Dennis retired in July, 2019. Pennsylvania has been his home after nearly 41 years as a priest in the Diocese of Greensburg. He helps out in parishes and continues his radio ministry with “Echoes of Poland” heard on radio station WEDO 810 AM, 93.3 FM now located in North Versailles, PA. “Echoes of Poland” is broadcast Saturdays at 2PM-3PM and Sundays 3PM-4PM. The program is heard in greater Pittsburgh and parts of the tristate area. He is very excited to now join the Polka Jammer Network and the new worldwide reach it will give his program every Saturday from 3PM-4PM, he thanks Joe Oberaitis for his encouragement, and he thanks Todd Zaganiacz for the opportunity. He resides in Mount Pleasant, PA, the hometown of the late Polka Hall of Famer, Joe Fiedor.

Fr. Dennis is honored to be the International Polka Association Chaplain. He looks forward to be of assistance to the organization in any way he can. He is grateful to Lenny Gomulka, Kevin Adams and Chris Bogdan for their encouragement in accepting the IPA Chaplaincy.

Fr. Dennis is also grateful to his late mother who taught him to love his Catholic faith and Polish music and culture.

May the Lord bless you with His joy, love and peace.