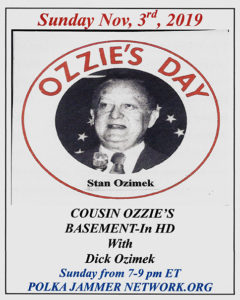 On Sunday, November 3 from 7-9 PM ET, Dick Ozimek will present a special memorial birthday salute to his late father, Stan Ozimek, still better known as Cousin Ozzie, who celebrated his 40th year in broadcasting in 1974. He was a renowned, esteemed and welcomed radio personality who was an announcer and producer and a life-long promoter of Polish music.

Also included on this Nov 3rd tribute will be some pre-recorded radio cuts from WTIC and the Polish National Home, Hartford in 1939 with the Krakowska Orchestra, some other radio cuts from WRYM, his last pre-recorded radio show in 1970, and a few others from the Polish Home, Hartford in 1958 with Gene Wisniewski. Plus,  selections from the 1967 radio program, with the Connecticut Twins from the Crystal Lake Ballroom, Ellington, CT.