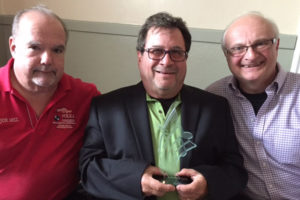 It was a gathering of the Erie, PA, polka radio legends on May 15, 2016, as Ken Olowin celebrated his 30th year in polka music.

Ken, the host of Hot American Polkas, is pictured in the center displaying a beautiful keepsake from the Polka Jammer Network recognizing his accomplishments. On the left is longtime Erie polka and Polka Jammer DJ “Major Mel” Himes. Gary Loncki, the former host of the Polka Jamboree and guest co-host on Ken’s Hot American Polkas show on WERG Radio and the Jammer, is on the right.

Ken also received a plaque of recognition from the International Polka Association and a congratulatory proclamation from Erie City Council. Ken has promoted polkas through his DJ work on the air, at Seven Springs, on polka cruises and other venues and as well being a strong supporter of the Jammer.

Fittingly, Ken celebrated his milestone with the Dynabrass doing a live remote from the Polish Falcons Club, Nest 610, in Erie. The Dynabrass played a variety of polkas, obereks and waltzes including selections from their new CD “And the Road Begins.” Family, including Ken’s 98-year-old mother, friends and a lot of dedicated, enthusiastic polka fans helped him celebrate his special day. Congratulations, Ken!