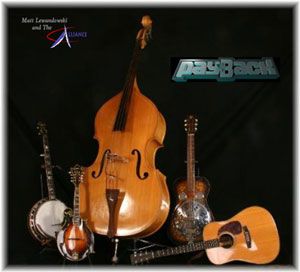 Tune in Tuesday afternoon, February 9 at 4 pm ET for this two hour special edition of Sandy Lewandowski’s Center Stage show and join us as we introduce Payback!, an album of original polkas brought into the Bluegrass genre. Matt Lewandowski will also co-host this week’s show.

Matt Lewandowski and the Alliance are proud to present “Payback”, a brand new release featuring 10 tracks of bluegrass music that were originally recorded as polka music. All tracks are originals written by various artists such as Wally Dombrowski, Michael Costa, Mike Matousek, Frank Liszka and others from the polka industry. The musicians feature Matt Lewandowski, Ryan Joseph, and various other talented musicians. Sandy will also play the original polka version of the songs.