We are deeply saddened to announce the passing of Richie Tokarz. He passed away on April 22nd at 12:15pm Chicago Time from complications of Type 1 Diabetes. He was 65 years old.

A native of Whiting, IN, Richie performed with a number of bands over the years, including the Pala Brothers, Marion Lush, Eddie Blazonczyk & The Versatones, and most recently Lenny Gomulka & The Chicago Push.  He recorded on numerous albums and was a composer of songs such as “Stella At The Wheel” & “Wrong Number Polka”. Richie was inducted into the IPA Hall Of Fame in 2000.

On behalf of all of us at the Jammer, we offer the family of Richie Tokarz our deepest condolences.
At the request of the family, no funeral services will be held. 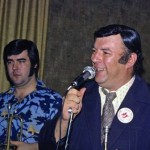