You are here: Home / News / Tribute to Tony Petkovsek – Saturday, May 4 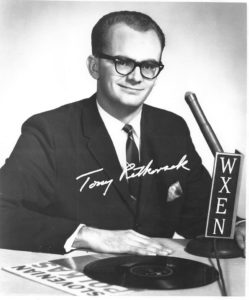 A tribute to Tony Petkovsek will be heard this Saturday, May 4, 2019 on Fred Ziwich’s International Sound Machine Show airing at 3PM ET (2 PM CT).

Tony, known as Cleveland’s Polka Ambassador, passed away on Feb. 14 at the age of 77.
He did his first FM radio programs in 1961, And, from 1963 to 2011 Tony’s Polka Party was heard daily on several different radio stations.

His induction into the National Cleveland-Style Polka Hall of Fame was unique because he was the first person who not a musician or vocalist to be given the highest award. He is also in the International Polka Assoc. Hall of Fame.

In 2001 he issued a 2 CD set of simulated radio broadcasts of him introducing the most popular and requested songs during his time on the air. Segments from that production with his voice announcing are what you will be hearing during this special show.