You are here: Home / News / Polkas From The Kitchen with Keith Pietranczyk – 12 PM ET March 28 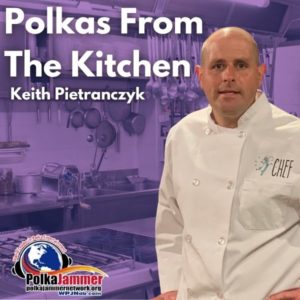 Starting on Friday, March 26, Keith Pietranczyk will be joining the Polka Jammer Network. At 12 PM Eastern, stop by his musical kitchen to find out what polkas he’s cooking up for you this week!!

Born and raised on the south side of Chicago, in the Hegewisch neighborhood, Keith has been around polkas for as long as he can remember and doesn’t remember a part of his life not involving this type of music. His father played bass and drums with his uncle’s band, Jerry Pietranczyk’s Polka Sharps. Growing up, Keith used to go to the picnic groves around Chicago as well as festivals. Since then, he has traveled near and far to attend and support the various festivals around the country.

Keith has been around music and instruments his entire life with his father being a musician and both of his brothers being accomplished in the music field in their own right. Keith has played a few different instruments in his time, including drums, bass, and trumpet. Unfortunately, as Keith says “I was never proficient enough to do what they do. I could read the notes and learn to play them but was never proficient enough to be on that next level”. Keith has also been on the radio as an IJ for the International Polka Association for the past 8 years and also served on their Board of Directors as both a Director (from IL) and the Secretary. Keith says, “being on the radio is my own way of contributing to the music we all love and keeping it alive”.

Keith and his wife Jennifer currently live in the western suburb of Bolingbrook, Illinois. Keith says, “For those that don’t know me well, if you see me at a dance, festival, etc., come say hi! I love meeting new people. I’m an avid foodie, a runner, and in my opinion, there’s no more fun on earth than Disney World. (Yes, I’m a Disney nut!)”.