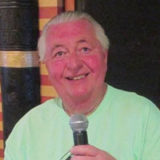 2022 marks Peter J. Danielczuk’s 51st anniversary of being involved in polka music. Very rarely is there a DJ/IJ who becomes involved in all aspects of polka music the way he has. He started his polka career in 1971 at WADS 690AM in Ansonia, CT as the engineer for the Victor and Sophie Zembruski “Polish Eagle Polka Show” while he was still attending the University of Connecticut. When Sophie had to have an operation, he took over the show on his own for a few months. After his work with the Zembruski’s, Peter worked full time on radio for a few years always playing at least one or two polkas every morning on his radio show. He later teamed up with Dick Yash for a few years on a show entitled “Polka Carousel.” The two would become one of the best Polka radio duos in the country. He and Dick would do live remote broadcasts from the New England Polka Fest every year which was held at Warsaw Park in Ansonia, CT.

Peter started his “Polka Celebration” radio show in the late 1970′s first on WADS 690AM in Ansonia, and then was on WWCO 1340AM in Waterbury, CT, as well as WDJZ 1530AM in Bridgeport, CT., and WNTY from Southington, CT. In 1992, his Polka Celebration show moved to WICC 600 AM for ten years, was heard throughout the Northeast, and was given the title of “Connecticut’s Prince of Polkas” by the New Haven Register, CT Post, Waterbury Republican, Hartford Courant, and New York Times newspapers. In 2003, his radio show returned to WDJZ where he remained until 2009. In 2007, he started his first FM show at WNHU 88.7FM (on the Internet at www.wnhu.net) from the University of New Haven in West Haven: Connecticut’s #1 College Radio Station. His show is still heard there today on Saturday mornings (pre-recorded) from 10:00 am until 12Noon ET. The Polka Celebration show is heard on www.247PolkaHeaven.com as well.

Peter was one of the original founders of the Polka Jammer Network back in 2003, and helped Polkaman Jack Baciewski start up “Polka Legacy”, an oldies network which operated from January 2010 until August 2011.

Radio isn’t the only thing Peter has been involved in. In 1992, he started his Polka Celebration TV Show on his local cable network which has consistently been rated the #1 watched TV show on that network. For years, Peter went to many dances throughout the country and filmed many hours of Polka fun for his TV audience.

Peter’s other accomplishments include a regularly written article entitled “Polka Celebration” for the monthly newspaper of the Polish Falcons of America “Sokol Polski,” songs he’s written entitled “Hooray For The New York Yankees” and “MaryAnn The Polka Angel,” CD liner note writer for well-known bands, hosting Polka Celebration cruises, promoting polka dances, Master of Ceremonies for festivals and awards programs in polka music as well as television, and currently serves as the Sergeant at Arms for the International Polka Association. In 2007, he was awarded the Joe Jozwiak Award from the International Polka Association, as well as being inducted into the National Association of Broadcasters Hall of Fame located in Ohio. Shortly afterward, he would be proclaimed the “Dean of Connecticut’s Polka Broadcasters”.

In 2011, Peter was awarded the “Frankie” Yankovic Award by the PAC. The Frankie Award is a national service award, given to those individuals whose efforts have been instrumental in sustaining the polka genre. In 2013, Peter received the Lifetime Achievement Award from the United States Polka Association (USPA).

His Polka Celebration show is also heard every 4th Sunday of the month (pre-recorded) from 3-4pm ET on WERG 90.5 FM in Erie, PA.

Peter has recorded with the Rich Bobinski Orchestra and Dennis Polisky & the Maestro’s Men. He occasionally performs with them as a guest vocalist.

Another proud moment of his life was in the late 1990’s when Peter had the opportunity to travel to Rome to meet and shake the hand of His Holiness (and future Saint):  Pope John Paul the Great.

Peter has made Polka a major part of his life and continues to promote and entertain his listeners. Peter walks and talks Polka music!

PETER J’s POLKA CELEBRATION plays the newest polka music, as well as classic polka oldies of the past. The show originates from “The Copper City of Ansonia, CT along the Naugatuck River.”