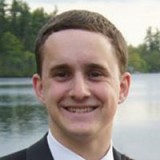 Matthew “Matt” Martin was born on May 1, 1995 in Lowell, Massachusetts. Since his birth, Matt has lived in Hudson, New Hampshire with his parents Michael (Mack) and Carol, and his older brother Kevin. He is currently attending Southern New Hampshire University in Hooksett, New Hampshire in hopes of earning a degree in Communications. With that degree, Matt’s goal is to work for the National Football League and/or CBS Studios. In his spare time, Matt enjoys playing and watching many sports, writing, spending time with friends and family, being of service to people, and of course, getting involved in polkas.

“How did Matt get involved in polkas,” one might ask. Matt will tell you he was practically brainwashed into liking polka music, but he’s proud of that. Matt’s mom grew up as a member of the Dom Polski and Polish American Veterans Clubs in Lowell, Massachusetts where her parents were members. Although his dad is not Polish, Matt’s dad was in the polka band The Polka Cuzzins for a short time. As you probably already figured, Matt’s parents met at a polka dance.

For as long as Matt can remember, polkas have blared through his house and in the family’s cars 24 hours, 7 days a week. And as many of you know, Matt’s dad, Mack, drives the van for the Chicago Push.

Matt does play instruments; he’s a brass man. He plays trumpet mainly, but he can also play Baritone Horn, Trombone, and Tuba. Matt started playing music by idolizing popular polka musicians such as Jimmy Weber, Frankie Liszka, Kevin Adams, Mike Stapinski, Tom Picciano, Mark Trzepacz, and of course the man Matt roadies for, Lenny Gomulka, his friend and hero. Matt achieved a life goal last year in Frankenmuth, Michigan, when he played “Crumbling Hearts,” with Lenny and the Push in his polka music debut. And before you ask, yes, he is the little boy from “Lenny Live,” and yes, he is still not a relative of Ricky Martin.

Matt hopes his show will provide an inspiration for the younger generation of polka music as he is currently the youngest IJ on air. With that in mind, you can hear Matt’s show, “The Polka Party Boulevard,” on Tuesdays from 6-7pm ET. Matt’s shows are currently pre-recorded, but he’s working on transitioning to a live show in the near future.