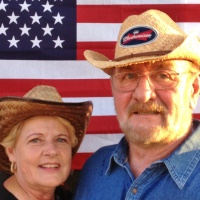 Freddie Bulinski was born and raised in Western New York (Niagara Falls) and being so close to Buffalo there was a connection to Polka Music that had an early and lasting influence. As early as 1960, Freddie was playing polkas for weddings and dances with his first musical group and he was called on by many of the well-established polka bands to “fill in” whenever possible.

Throughout his early years, Freddie played polkas as well as developing a strong foundation in other styles of music to include Big Band and Pop.

In 1967 Freddie made a strategic move connecting with some of the Buffalo polka bands including the Musicales, Walt Jaworski, The G-Notes , Wanda and Stephanie and the fabulous Jumping Jacks. This proved to be a great experience for both learning the different styles of polka music and learning how to be a band leader. In 1968, Freddie enlisted in the U.S. Army and received training as a Russian Linguist. He served a tour of duty overseas as a translator and was eventually assigned to the Headquarters of the National Security Agency. He held several positions at the agency and after a 35 year career, retired and moved to Delaware.

In 1969 he married Marsha Sumera from Blasdell, NY. She is a graduate of Canisius College of Buffalo and was employed as a Quality Control Manager for Giant Foods in Washington, D.C. Freddie and Marsha’s daughter: Karen is married to her husband Scott, and they have two sons: Zachary and Jacob. Karen was a member of a Polka dance group, the Polka Kids, and performed at many festivals and dances under the direction of Butch and Mary Kotowski.

Freddie has written and recorded over 20 original tunes on 9 albums with his band The Brass Works. He migrated Pop, Country and Bluegrass songs and transformed them into outstanding Polka arrangements. He and his Brass Works Orchestra were among the first Polka Bands to perform for a Polka Mass.

In addition to being an active Polka musician and band leader, Freddie served the Baltimore Polka community during the years 1979 through 1985 as a Polka DJ on WBMD 750AM. The show aired every Saturday and with his co-host Gil Ziemski brought the latest in Polka music into the homes of the Baltimore Polka fans. It was in 1980 that Freddie together with his wife, Marsha established and successfully kicked off the first “Polkamotion By The Ocean” festival in Ocean City, MD, and by inviting Gil and Mary Ziemski to partner with him brought Polkamotion to national prominence and special success. Freddie and his partner Gil, along with an enthusiastic festival committee, sought to introduce the concept of putting together a festival that really belonged to the thousands of fans who came out to enjoy the finest Polka music, performed by the best bands available. In September, 1980, Freddie introduced the festival from the stage in Ocean City by saying, “This is Polkamotion, and This is for You!” For over twenty-five years he worked on this premise, the festival belongs to the people, “our job is to give them what they want at an affordable price with no compromise in excellence and especially friendship.”

Freddie and the Brass Works have made several radio and television appearances including doing shows with Jolly Joe Timer in Allentown, PA, and a nationally syndicated show on the USA cable network with Titan Sports Productions appearing with Ivan Putski and former Governor Jesse Ventura. Other milestones in Freddie’s career as a promoter and performer have included several Polka Trips; many bus trips to Catskill Polka Weekends to support Dick Pillar’s Pines Weekend, Jimmy Sturr’s Polka Weekend, Bernie Goydish, Billy Flynn, Fran Fierst, John Stanky and others who put on these great Polka Affairs.
Freddie has organized Polka Trips to Hawaii and cruises throughout the Caribbean and South America. He and the Brass Works have appeared at virtually every major Polka Festival, from Polkabration in New London, CT., to the Frankenmuth Festival in Michigan. The Brass Works have received several awards of recognition including the best new band award at “Polka Spree by the Sea” in Wildwood, N.J. in their first festival appearance in 1976. Freddie has received awards of recognition for his contributions to the community from the Polish Community Association of Baltimore. He received a special friendship award from the Hrukus Hellraisers from Cohoes, NY. He was also presented with a Polka Pioneer award from the Buffalo Polka Boosters, and he was presented with the Key to Ocean City in recognition of what he and “Polkamotion By The Ocean” have done to increase tourism in this Maryland resort.

Freddie and his wife Marsha are both cancer survivors and are grateful for the blessings and prayers they have received during their difficult times. They both look forward to spending time with family and friends and reconnecting with the wonderful Polka People that they have known through the years of both the Brass Works and “Polkamotion By The Ocean”.

Marsha has been instrumental in establishing and running Polkamotion by the Ocean. She hosted many Polka trips including Hawaii, several courses, and of course many bus trips. Marsha was the guiding force in getting Freddie do a show on the Jammer in 2010, and is now a true partner in Freddie’s Fun House.