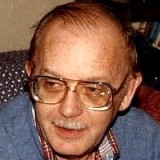 Dick Ozimek is the son of the late Stan “Cousin Ozzie” Ozimek who was on the radio in the greater Hartford, CT area for well over 40 years starting in 1935.

Dick started his short musical career as a drummer in the high school band and then proceeded to join the Merry Makers, a three piece polka band, who performed every other Sunday at the Polish National Home in Hartford, CT, plus various weddings and social events. Upon the passing of Vic Meyers of the Gene Wisniewski Orchestra, Dick took his place for a short time and then with the death of Joe Rock, Dick was asked by Johnny Dyno to join forces with the Johnny Dyno Orchestra.

During this time period, Dick was also the radio engineer for his father on most of his programs. It then came time to pursue Dick’s business career with the RCA Corporation and to cease his musical and radio engineering duties. He was promoted and transferred throughout the USA many times during his 30 year career with RCA which ended with the sale of RCA to GE and then to Thompson, SA.

In 1997, Dick and his lovely wife Jane plus their pet dog Spot (that’s right folks….Dick, Jane, & Spot) made their final relocation to retire in Venice, FL. Throughout all of these moves, Dick also moved his father’s vast record collection, which was found in his dad’s basement. (Spot passed away in April of 2012.)

Polkaman Jack Baciewski brought Dick Ozimek to the Jammer on November 4, 2006. Polkaman Jack was a great admirer of his Dad: the late Stan Ozimek. When Jack was just a little boy, his Mom & Dad would often bring him to the many live remotes Stan ran at the Polish Home in Hartford, CT. Dick Ozimek was on the Jammer until December of 2009 when he left the network to join Polkaman Jack in his new venture: Polka Legacy. When Legacy folded in August of 2011, Dick Ozimek returned to the Jammer the following month.

“Cousin Ozzie’s Basement” will feature the polka bands of his dad’s era, plus plenty of nostalgia and behind the scenes info about the bands that performed during that generation.