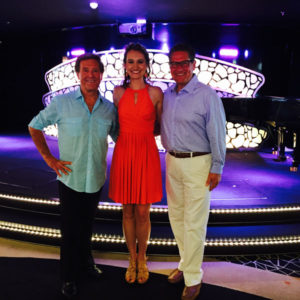 The Polka Jammer Network, the world leader in polka internet broadcasters (polkajammernetwork.org) will feature a LIVE 2 Hour remote on Saturday April 11, 2015 direct from the ballroom of the Villa Roma Resort between the hours of 8:00-10:00 PM Eastern (7:00-9:00 PM Central.)  Musical guest stars will be the 18 time Grammy awarding winning Jimmy Sturr Orchestra with special guest IPA Favorite Female vocalist of 2014 and TV Host from RFD-TV, Mollie B. In addition, a “cast of thousands” will join legendary polka music broadcaster Keith Stras who will serve as your emcee and host.

Jimmy Sturr and his band are the most decorated polka performers of our era.  Jimmy Sturr & his Orchestra has over 106 recordings; the excellence of these recordings has been recognized and rewarded throughout the very competitive music industry. The fact that Jimmy Sturr & His Orchestra is on the Top Ten list of the All-time Grammy Awards, has won eighteen Grammy Awards and has received more consecutive Grammy nominations that anyone in the music field is quite an accomplishment.

Mollie Busta has won the title of the “Favorite Female Vocalist” award numerous times, both from the United States Polka Association and the International Polka Association. She has also won multiple awards from the Polka America Corporation for her polka recordings and can be seen each week on the Mollie B Polka Party on RFD-TV.

Keith Stras has been on the air for 38 yrs. in Chicagoland and is a member of the Broadcasters Hall of Fame, as well as, The Polka Music Hall of Fame.®