You are here: Home / News / January is National Polka Month!!

The How and Why January is National Polka Month 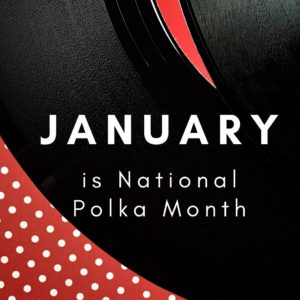 After the Holiday season, the music business was typically dormant.  Once the lounges, social clubs, associations all had hosted their Holiday and Christmas parties, it was especially slow, plus the fact that in Wisconsin, the winter weather could be a bit treacherous and overwhelming.

So back in 1968, the Wisconsin Orchestra leaders decided to get together and proclaim January as “National Polka Month” to stimulate band engagements and get the fans out during the cold winter months.

The newly formed International Polka Association (IPA) officers had relationships with a number of the bandleaders in the Wisconsin Polka Community including Dick Rogers, Don Peachy, Verne Meisner, and Alvin Styczynski, just to name a few. Then IPA President Leon Kozicki contacted them and asked if the IPA could help expand the celebration, to which they agreed.  The IPA had thousands of black and hot pink bumper stickers made and had them distributed across the country.  These “Do Your Thing, Dance the Polka During January” stickers, complete with the IPA Logo and a silhouette of a dancing couple soon were adorning thousands of concertina & accordion cases and car bumpers across the USA and Canada. The IPA also produced a promotional 33 1/3 recording featuring such personalities as Bobby Vinton, Sig Sakowicz, Bill Cullom, and Lawrence Welk reminding people that January was National Polka Month & Polka Music is Happiness!

The concept of the January Festival of Bands was borrowed from an event that was held at the famous Club 505 in Chicago’s Southeast Polka beltway. Former owners Wally & Josephine Mlynarczyk booked 5 bands every week for years. Club 505 featured music on Wednesday, Friday, Saturday, and 2 bands on Sunday (which was broadcast over WJOB radio in Hammond, IN., followed by free sausage & sauerkraut for everyone). The bandleaders got together and wanted to do something to show their appreciation for all the work that Wally & Jo did through the years.  So, on New Year’s Day nearly a half-century ago, the bands donated one hour of their talents for a Parade of Bands every year. The IPA expanded on this idea by presenting the January Festival of Polka Bands on the third Sunday in January.  This event has been held at many historic venues around Chicagoland over the years such as Personality Lodge West on Archer Ave., VFW on 63rd Street in Summit, International Union of Operating Engineers Hall in Countryside, IL, and Glendora Banquets, where the event continues to be held.  Back when the IPA had their building on Kedzie Ave, every Saturday evening in January a polka dance was held and when the building was sold the event was moved to Polonia Banquets and renamed the “Warm-up Dance” the Saturday before the Festival of Bands. Please continue to check www.ipapolkas.com for updates on the 2021 National Polka Month event.

Many other states, promoters, and organizations became involved in promoting events for National Polka Month, keeping the music alive!

So this January, although we will be unable to attend live polka events, we invite you to watch your favorite band on YouTube, purchase a polka recording, and of course, tune into the Polka Jammer Network during January. Let’s celebrate National Polka Month together!