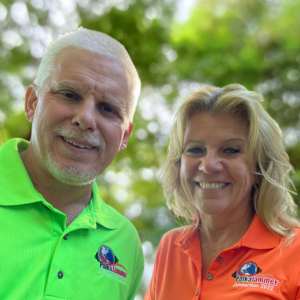 Gary Zielinski was born and raised on the Southside of Chicago but now presides in Crest Hill, Illinois with his wife of 32 years, Valerie.  Over the years, Gary and Val had 4 beautiful children and currently have 2 rambunctiously-wonderful grandchildren, waiting as patiently as they can for more.

Gary comes from a Polish background, growing up listening to and attending a variety of polka events with his family throughout the years, particularly drawn to the drummer. Gary then started playing drums himself when he was around 10 years old.  Later on, in high school, he met his future brother-in-law Bob Piven and began playing various Polish events as a drummer, subbing here and there for a few bands.  Gary also plays the piano, but only for his own enjoyment.

Val grew up in Wisconsin listening to the German/Wisconsin-style polkas whenever she was at her grandparents. “Roll Out the Barrels” was literally the only polka she could sing along with until she met Gary.  It took a bit, but Val can now pick out which one of Gary’s dads, uncles, or cousins are singing on an album and she can generally sing a few lyrics without totally embarrassing herself.  She still can’t polka to save her life though.  Gary is working on that.  She did agree to “Chi-Town Express” playing at their wedding, so he feels there’s a chance for willingness to improve her dancing skills.

Gary co-hosted the Richie Gomulka shows over the years along with Bob Piven, and more recently, he and Richie continued the shows until the end of 2022. Gary always wanted to have his own show and continue promoting Polka Music to the people that love listening to it over the airwaves. Gary and Val recently retired and wanted to do this together and maybe polka dance someday into the sunset. Once she learns how to follow his lead of course!

Gary and Val look forward to continuing to promote polka music and events and hope you will enjoy their show!   Feel free to connect with them at lunchtimepolkas@comcast.net email.