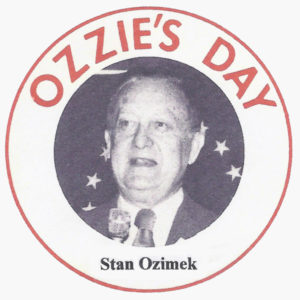 On Sunday, November 6 from 7-9pm ET, Dick Ozimek will present a special memorial birthday salute to his late father, Stan Ozimek, still better known as Cousin Ozzie, who celebrated his 40th year in broadcasting in 1974. He was a renowned, esteemed and welcomed radio personality who was an announcer and producer and a life-long promoter of Polish music.

This special salute will include some pre-recorded radio segments with the real Cousin Ozzie behind that microphone with some spots going back as far as 1939. Also to be heard will be the Ray Henry band from Dick Pillar’s Polkarama from Ocean Beach Park in 1963 and the initial radio broadcast of Dennis Polisky playing the Clarinet Polka at the young age of 15.

In those polka hay days, it was Stan Ozimek’s voice that carried the voice of Polka and Polish folk music throughout New England which was a contributing factor to the success of many Polka musicians and bands in New England.

We will continue to enjoy his vast record collection, found in his basement, and left to his son Dick and heard every Sunday evening on the Polka Jammer Network from 7-9pm, ET, from COUSIN OZZIE’S BASEMENT.