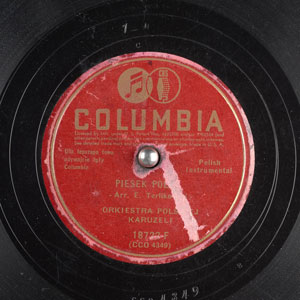 The BadBoy, Eddie Biegaj, is up to his old tricks again! This time he goes where no other IJ has gone before. Back, back, back in time, to a time before Li’l Wally was the World’s Polka King, and then back again to the modern era. Travel through time with Eddie like no one else dares to do. This week he explores early Li’l Wally cuts before the Wally/Zima recordings. This is the Edmond Terlikowski SHOWCASE.

Before Li’l Wally becomes the mega Polka Star of the 1950’s he records with Edmond Terlikowski. Edmond used many of the great Chicago vocalists of the day like Joe Durlak, A. Malek, J Nieminski, F. Drzewicki and of course a very young Li’l Wally. But the BadBoy doesn’t stop there. He places in juxtaposition more modern cuts of the same tune. Now Staś Bulanda sings the same song right after Li’l Wally only done a new way. Happy Louie Sings Oj Dana, but first Wally sings a completely different set of lyrics to the same melody. Scrubby and Larry Trojak sing the same lyrics to Oj Nic Nie Mam as Malek and Durlak with a Scrubby twist. Even former Crusader Randy Krajewski belts out Young Fellow Oberek after Joe Durlak sings his version of Young Farmer. Same melody. Same Polish Soul. Different feel. And there’s more.
Enjoy this very special adventure into the Old Chicago Sound of Edmond Terlikowski. You might say the band sounds more like an Eastern Style band like Ignacy Podgorski. And you would be right! What? A Chicago band, sounding like an Eastern band? What will they come up with next? Only the BadBoy dares to compare.

The BadBoy Retro Show is Sundays from Noon till 1 Eastern Time and 11 to 12 noon Central Time, right after Jimmy Sturr. And DO NOT FORGET… Thursdays have been expanded. 3 hours of BadBoy madness starting at 5 Eastern! Tune in, and get in the chat room. There is always an open seat just for you.